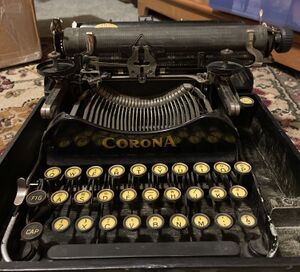 Photo of a Corona 3 in need of restoration.

The Corona 3 was a very popular typewriter. Manufactured between 1912 and 1941, there were over 600,000 of these machines made and many are still in existence today. They are notable for their folding capability, and for being the first typewriter to carry the “Corona” name. They are commonly available and can easily be had if you are interested in owning one of these little pieces of history.

These machines were popular with journalists for their portability and many of them came with a stand that allowed the owner to set it up and type where ever they happened to be at the time. The case is often found broken as a result of this portability, however; it featured a flap on the front designed to fold down and allow for easy typing with the machine in the case.

The Corona 3 is among the smallest and lightest full-featured typewriters ever produced. Corona never created another machine that compared to it in terms of its size and its weight.

Originally branded the "Standard Folding", the machine that would become the Corona 3 was invented in Groton, N.Y. in 1906. Made of aluminium, some