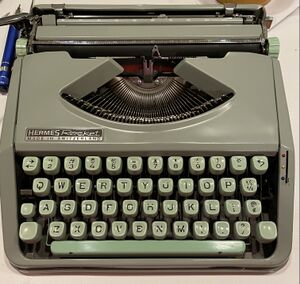 Hermes was a Swiss typewriter brand that made higher-end standard and portable machines. Famous for their mint-green color scheme and for being the favourites of noted actor Tom Hanks, Hermes machines are a reliable choice of typewriter that is generally popular with the collecting community. Hermes was a division of the Paillard-Bolex company, notable for their music boxes and cameras.

Paillard-Bolex began development of a standard typewriter in 1913, the Hermes 1.

Noteable models from the Hermes line include the Hermes 3000, as well as the Rocket and Baby ultraportables.