An IBM Selectric with a 15" carrier length.

The IBM Selectric's typeball gives it some major advantages over a traditional typewriter. Typeballs can be swapped out quickly allowing for multiple typefaces on one machine, the selecting mechanism is much faster than a traditional typewriter, and some machines are even equipped with IBM's "Dual Pitch" option which allows the machine to type in both 10 cpi (Pica) and 12 cpi (elite). 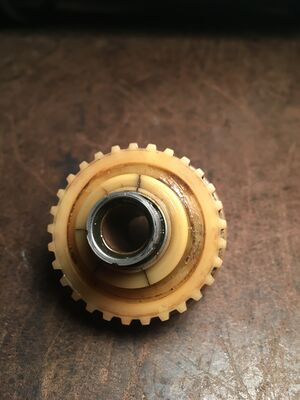 This is a newly extracted hub from a 13" IBM Selectric correcting II. Note the cracks in the hub. This will have to be repaired

Due to their reliance on lubrication and complexity, IBM Selectrics will often not work when you first get your hands on it. Some times they won't even turn on. There are (usually) about 3 different issues that are universal to every machine.