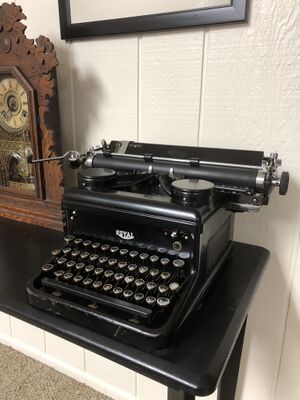 The Royal KHM was manufactured by the Royal Typewriter co from 1935-1938. This machine is the successor to the Royal 10 and the predecessor to the Royal KMM. It was also the first Royal designed with a key-set tabulator. These machines strongly resemble the Royal 10, but with covered spools and sides. This design also moved the touch control from the under side of the typewriter to the right side.

Royal KHMs are relatively solid machines. These will most likely be found with broken drawbands and covered in grime.