The Smith-Corona "Flattop" was the successor to the Corona 4 and represented a total redesign of the Smith-Corona portable line. They came in 3 main variations: the Standard, which came in a short- and medium- length return lever, and the Sterling/Silent, the higher-grade version with a tabulator system, paper-table extensions, and a curved return lever. The Silent had all the features of the Sterling and added some felt soundproofing. They tend to be viewed quite highly, noted for their light touch and segment-shift mechanisms. 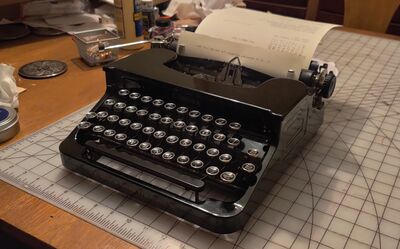 Smith Corona "Flattops" succeeded the Corona 4 in 1931 and was built until 1941. Known as the "1 series" as their serial numbers started with the prefix 1C [Standard], 1A [Sterling], or 1S [Silent], the Flattop was a complete redesign from the Corona 4. Smith-Corona designed new linkage and escapement systems, and an extremely light segment shift marketed as the "Floating Shift" mechanism.

The Flattop was marketed in 3 colors: black, burgundy-maroon, and green, and initially sold for $60 in 1933.

The typebar linkages tend to come off rather easily on these machines, but are very easy to reattach with just a screwdriver. These machines are very mechanically sound and reliable, so they tend to age very well. Smith Corona Typewriter Typebar Links Off, Repair, Reattach, Straighten, Adjust | Phoenix Typewriter on Reattaching Linkages 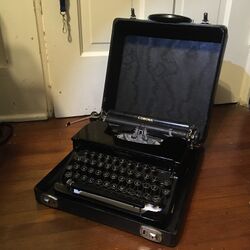