Difference between revisions of "Royal KMM"

In 1939, Royal sought to create a successor to its existing "KHM" model. The KMM was the result. Featuring a new "Magic-Margin" system seen on many other Royal machines, the KMM is a very common standard machine that writes well. 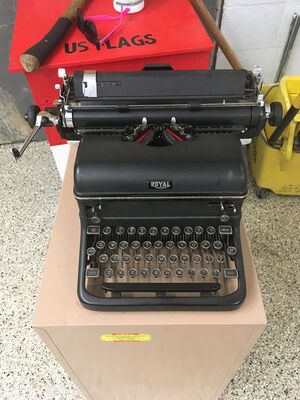 Royal KMM bells often don't like to work. This can usually be fixed by flushing the end of line lock and bell trip mechanisms. Occasionally these can be found missing left-hand side panels, as they are easy to pop out. Misaligned carriage clamps can occasionally cause a carriage to drag too.

-Mill: The KMM was often used in the Second World War, and many examples were used to transcribe telegraph/radio messages. These examples will often have slashed zeroes and/or dedicated 1 keys.